The Great Wyvern Fete
Back to Newington Day has its origin in the annual school fetes of the 1920s and 1930s. Our earliest record of one of these concerns the ‘Great Wyvern Fete’ held on 1 November 1930. Planned initially as the ‘Stanmore Jubilee Fete’, one of the events marking the 50th anniversary of the College’s move to Stanmore in 1880, the name ‘Great Wyvern Fete’ quickly stuck and was used again for the following years’ fetes. The December 1930 issue of The Newingtonian provides a detailed account of the day.

The fete started more formally than nowadays, with prayers by the College Chaplain, then Lady Street, wife of the Chief Justice and Lieutenant Governor of NSW, opening the event, and a vote of thanks made by the President of the Methodist Conference.

Stalls included ‘that old favourite’, the Sweets Stall; the Fancy Stall (‘one really of interest only to the ladies’); the Kitchen Stall, conducted by the MLC Old Girls’ Union; the Bathroom Stall; a stall selling provisions, jams and jellies (‘it is certain that the larders will be well stocked in this department for many weeks to come’); a grocery stall ‘conducted on very original lines’; the Bachelor and Tobacco Stall conducted by Misses Wilson and Stewart and ‘very popular with most of the young men’; and the Flowers and Plants Stall, whose blooms and vines ‘were objects of admiration throughout the Fete.’

An element of competition was provided by Cakes No.1 and Cakes No.2, conducted by the girls of MLC and the Parents’ and Friends’ Association respectively. An ice cream and cool drinks stall attracted the greatest number of boys, while a cup of tea and a sandwich ‘enabled a great many people to spend the evening as well as the afternoon here’. Lucky Dips were conducted by the boys and a ‘Lemon Tree’ with mystery prizes by the ONU Younger Set.

Other entertainments included miniature golf on the Johnson Oval, a court in Mr O’Brien’s classroom, in which two ‘policemen’ arrested anyone they liked and imposed small fines, and a cinema that showed the Harold Lloyd film ‘Hot Water’ and several short films in the evening. With the cricket season in full swing, the College’s 1st XI provided further entertainment in a competition match against St Ignatius on the Buchanan Oval.

The Wall Street Crash, precipitating the Great Depression, had occurred just a year previously. ‘But, although business is so slack everywhere and money is so scarce,’ The Newingtonian noted, ‘all true supporters of Newington turned up and spent as much as they could and so helped to make the Fete the great success that it was.’ 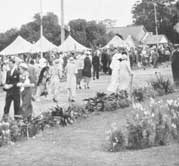 Stalls at the Wyvern Fete 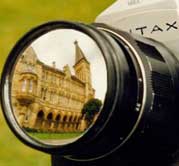