The Reverend Dr Peter Swain’s work in preserving and promoting Newington’s archives over thirty years will be marked on Saturday 21 July with the formal naming of the new Archives Exhibition Room in his honour.  Peter served as Newington’s Chaplain from 1970 to 1996.  Among a range of other roles, he became the College’s unofficial historian and archivist.  After retiring as Chaplain he was appointed part-time Archivist for the next three years and, subsequently, worked in the Archives for a further decade as a volunteer.

During this long period, Peter ensured the survival of the existing archives, built up the collection by encouraging transfers and donations of archival material, and mounted numerous displays to enable students and other members of the Newington community to engage with the College’s rich past.  The Chaplain Peter Swain Archives Exhibition Room will be a fitting reminder of Peter’s passion for Newington’s history and documentary heritage and of his work over many years to make them an important part of the College’s life.

The Chaplain Peter Swain Archives Exhibition Room, located on the second floor of the Founders Wing, is open from 2 to 4pm each weekday and at other times by appointment.

As at the end of financial year, the Foundation reports that the Sesquicentenary Capital Campaign has raised $4,411,231, in gifts and pledges, of our $10,000,000 goal for the Building Fund and Scholarship/Bursary Funds since November 2009. The building works have commenced on the Pyke Science Building and the AJ Rae Library & Resource Centre and are now in full swing. The project will be completed for the Sesquicentenary in 2013. In addition to the building works, various Scholarships and Bursaries, such as the Chris Wild (ON ’91) Indigenous Bursary, have been established.

In addition to this figure, this year’s Annual Giving, to date, has raised $118,727. Donations to the Building Fund through Annual Giving are used for smaller but immediate projects such as the fit-out of computer labs and the Glasson Pavilion refurbishment. Donations to the Scholarship/Bursary funds are more long-term and are in conjunction with the above mentioned Scholarships and Bursaries.

Any donation to any of the funds are greatly welcomed and warmly received. 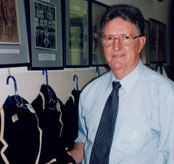