On 18 February 1863, Rev John Manton wrote a letter to Mr A MacArthur, one of two leading Wesleyan churchmen then visiting England. In December 1862 these men had been asked by the Church’s Education Committee to ‘…secure the services of two competent Masters, and send them out with the least possible delay.’

John Manton’s follow-up letter, his copy of which is held in the College Archives, provided MacArthur with news of developments in the last two months. A contract had been let for £1050 for repairs at Newington House, not including the fencing that was also needed. He reported rapid progress, with the slating of the main building completed, replacing the previous shingles, and some of the internal work also done. Several friends of the project had visited Newington House and were all ‘…much pleased with the situation and the place itself.’

Fund raising for the work was continuing: he and others, including Rev William Kelynack, a later President of the College, had secured promises of £690 in the Sydney, Goulburn, Bathurst and Illawarra Districts. Manton hoped to raise ‘a respectable sum’ in Maitland, but noted that it would be ‘…some time before the money can be got, in consequence of the dulness [sic] of the times.’

‘I see nothing in the way to prevent our making a beginning in July next,’ Manton declared, ‘should the Masters arrive by that time, which I sincerely hope may be the case.’ He would soon begin to advertise the opening in July ‘…in full confidence that the Masters will be forthcoming by the time we want them.’ This, however, was clearly his major concern. He urged MacArthur to ‘give the subject your earliest attention, as we should not be able to find suitable persons here.’ In due course this question was to be resolved in an unexpected way.

* A reminder that the Archives exhibition space in the ONU Centre on the top floor of the Founders Building is open from 2.00 to 4.00pm each weekday and can be opened at other times by arrangement. Contact David Roberts, College Archivist 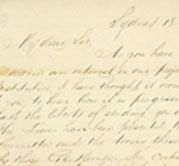